The first house in Travemünde 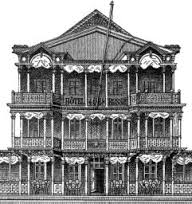 Travemünde was founded in 1187, and in the year 1802 it was awarded the title „seaside resort“. Marine air and luxury, to this day, attract thousands of tourists to this seaside resort.
The idyllic part of the Hansestadt Lübeck, however, became most famous through its Casino and the „Travemünde Week“, a traditionl sailing event first started in 1889, when the Hamburg merchants Hermann Wentzel und Hermann Dröge had their first sailing race before the shore of Travemünde. The winner received a bottle of Lübeck „Rotspon“, and still does nowadays. Since then, every year, the most beatuiful regatta in the world takes place here in Travemünde.

You can see that tradition is very important to us. When, 1830, the first wealthy guests started coming from Russia, and the new steamboat line Travemünde - St. Petersburg became more and more successful, the Hôtel de Russie opened at the Vorderreihe 52 in 1832. Almost 80 years later the old building was torn down, and made room for a new hotel, which has since been known under the name of „Deutscher Kaiser“ (German Emperor). To this day you can enjoy its hospitality at the heart of the seaside resort, with an unforgettable view of Travemünde.